Is pollen impacting your employee productivity? 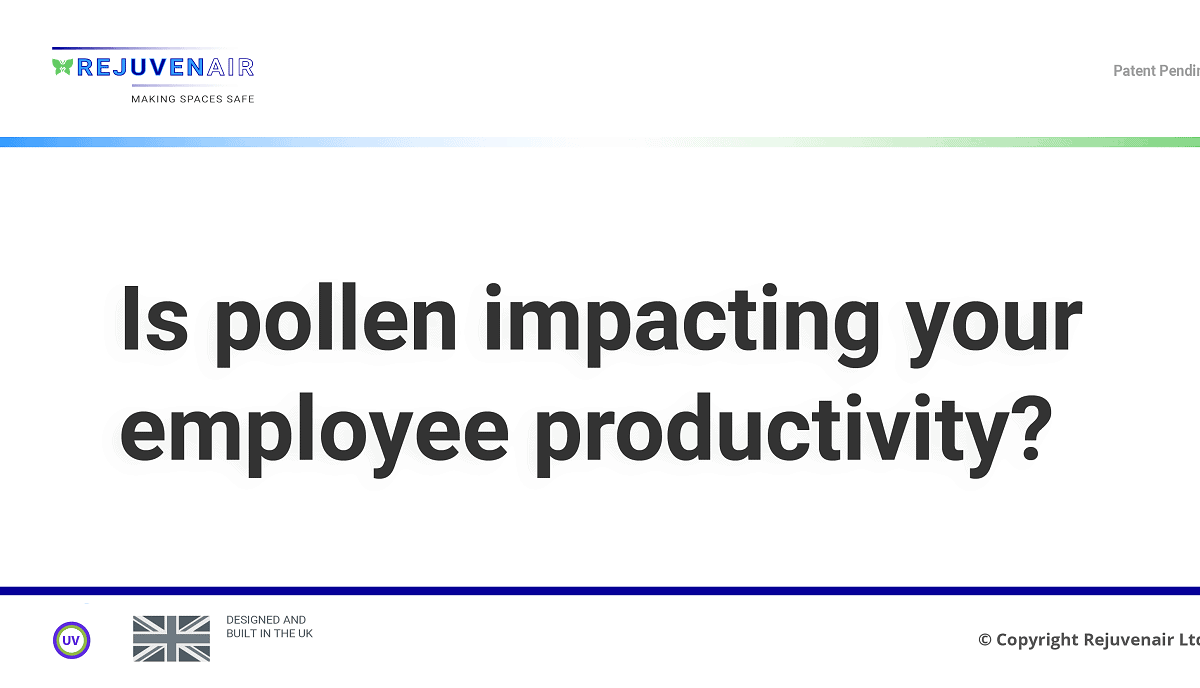 Allergies affect about one in three people in the United Kingdom, which is roughly 20 million of us. Interestingly, allergies are the most common chronic disorder in children, affecting up to 40% of all under 18s. One of the most common in both age groups is seasonal allergic rhinitis, otherwise known as hay fever.

One in four people in the UK suffers from hay fever. Hay fever is caused by an allergic response to particulate matter, the most common being pollen. Reactions can also be caused by dust mites, dust and pet dander (fur, feathers, saliva, etc. shed by animals). The condition is classified as incurable by the NHS, and every year, millions of people in the UK have to navigate hay fever.

Many resort to taking antihistamines to manage their reactions. However, these medications can have some unpleasant side effects, including lethargy and headaches. Equally, some fairly alarming findings were published in The Guardian a few years ago indicating that these over-the-counter drugs could have a more serious impact on our health.

But, as pollen season wears on, how can hay fever sufferers manage their symptoms? A common traditional remedy is a saline nasal spray, which alleviates pressure in the nasal passages. Advocates of homeopathic medicine also recommend essential oils such as peppermint and eucalyptus. Applied to the temples, the aroma can clear blocked passages and soothe sinus pressure.

Nutritionists also report that changes in diet can alleviate symptoms. Studies suggest that people that eat trans oleic acid, which largely occurs in dairy and red meat, are three times more likely to suffer hay fever symptoms. Others think it’s all about timing; for example, leaving outdoor workouts until the evening when pollen counts are lower.

Equally, some have sung the praises of Himalayan salt lamps. Purportedly, these objects remove dust, dander and other particulate matter from the air, therefore reducing allergy symptoms. However, these items do have a certain aesthetic sensibility that may be inappropriate in office environments.

Indoors at least, there is one statistically proven approach. Air purifiers remove pollen and other airborne particles from the atmosphere, creating a more comfortable environment for the one in four of us that suffer from hayfever. This could have a remarkable impact on productivity in workplaces; currently, estimates suggest that allergic rhinitis costs the economy £7.1 billion every year.

Rejuvenair units could really make the difference for hay fever sufferers. This technology uses H13 HEPA and military-grade UVGI filters together to eliminate up to 99.9% of particles in spaces up to 60m2. This doesn’t stop at pollen and pet dander; it’s also been proven to remove viruses and bacteria from the air, including H1N1 and COVID-19.

Air purification has benefits far beyond the elimination of pollen. With the potential to remove all sorts of pathogens from the air, imagine the productivity we could recover – not to mention the comfort and happiness of employees. As we enter into a new era of health-consciousness in the workplace, air purifiers are the scientifically proven solution.